By Sunny A. David, Onitsha
The need to celebrate and immortalize icons and achievers for their contributions to both human and infrastructural development has been stressed.
This formed the focus of lectures at the fifty-eighth Founder’s day and inauguration of Professor Chike Obi Memorial Lecture by the University of Nigeria Alumni Association, Onitsha branch.
The event held at the Sharon House Onitsha, was attended by Mathematicians, the academia, members and other branches of the Association including Enugu and Delta students among others.
The Professor Chike Obi inaugural lecture has the theme “Harnessing Mathematical Advantage For Business, Governance, Science and Technology.” 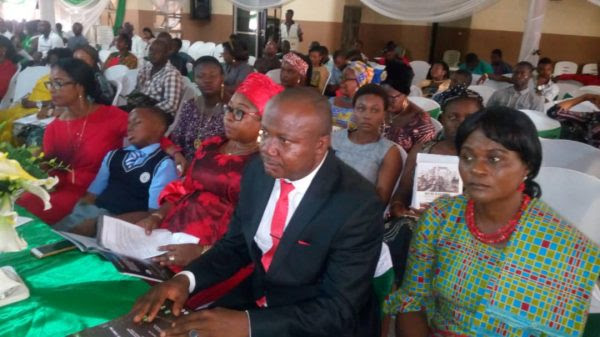 Presenting a keynote address on the theme of the inaugural lecture, a former Minister of Power Professor Bartholomew Nnaji represented by Chief Emeka Anyaoha narrated a story on how Professor Chike Obi solved a mathematical head spinner, proving the existence of periodic solutions to non- linear ordinary differential equations.
In a lecturer, a former Governor of Anambra State Mr. Peter Obi described education as the driven force for knowledge and development, stressing the need for the society to celebrate chievers like Professor Chike Obi adding that knowledge changes the world and make people rich.
Professor B.I.C Ijeomah spoke on “The Role Of Professor Chike Obi And The Relevance Of Mathematics In Calculation”, while Professor Alexander Animalu spoke on “Mathematics For National Development- A Tribute To The memory Of Professor Chike Obi”.
The Chairman on the occasion and the State Chief Judge, Justice Peter Umeadi commended the initiative for inauguration of Professor Chike Obi memorial lecture saying that the International icon was committed to better his people and change his environment positively.
While the President of the Association Chris Ajugwe and his Vice Mr. Chris Achebe sad that their aim was to keep alive those icons who gave selfless services for the development of the nation.
Others who spoke at the event were the Vice Chancellor of the University of Nigeria, Nsukka, represented by the Deputy Vice Chancellor Administration Professor Charles Igwe, Lady Pat Okeke, Reverend Father Arazu, Mr. Vincent Obi and Adaeze Omaliko among others.
Presentation of prizes for Professor Chike Obi competition and Golden Girls of Technovation USA 2018 as well as presentation of awards also featured at the event.

Bauchi Governor lays foundation of 500 housing units to be constructed by NEDC, flags…

This site uses Akismet to reduce spam. Learn how your comment data is processed.

No any data received from Yahoo Weather.